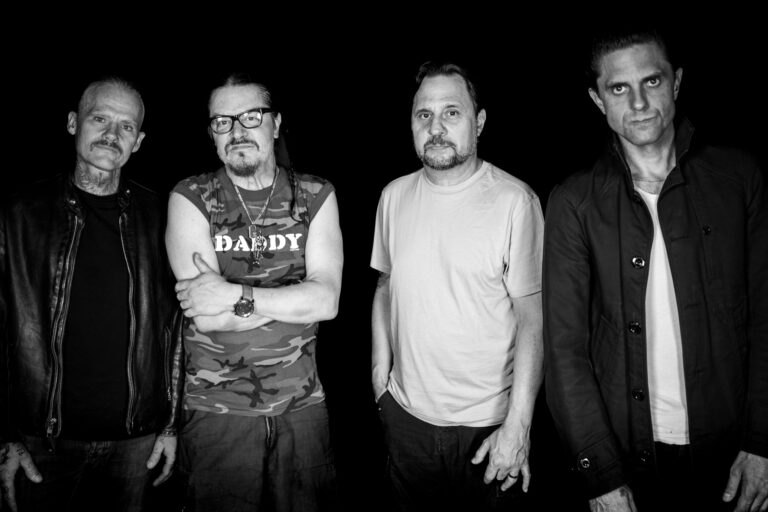 Stream the official clip for “Reign of Error”

The new album will be released on streaming services, CD, cassette, and five different vinyl versions.

When Dead Cross released their self-titled debut in the Summer of 2017, Mike Patton, in conversation with Rolling Stone, said “I’m not some young tough guy trying to prove a point anymore. For me to make a record like this, it’s entirely a musical adventure. I just think it’s fun, and it makes me smile a lot.” Visually, and audibly, Dead Cross is a snarling beast from some of music’s most experimental and dare we say, hardcore, musicians: Dave Lombardo (drums), Michael Crain (guitar), Justin Pearson (bass) and the aforementioned Patton on vocals, but at its core it’s a group of friends having fun, paying homage to the music they love and asking music fans to come along for the ride. It’s that very friendship that brought the band members back together once again and gave us II.

In late 2019, Michael Crain was diagnosed with advanced cancer, rallying the bandmates to his care but also opening up the next chapter for the foursome. Crain shares: “Words can’t even begin to describe how much this album means to me. It’s birthed of pain and uncertainty. The slow, excruciatingly painful, and nauseating recovery from cancer treatments were the catalyst for every riff and note on this album. However, my will to live and be with my brothers Justin, Dave, Mike, and co-producer Ross Robinson, got me out of bed and running into the studio every day to get it all on tape.”

Pearson added: “That motherfucker was going through chemo when we were tracking. It was brutal to see, and I’m sure far more brutal for him to live through, but the rest of us think that was what helped Crain get through battling cancer. It’s there in the music. There is legit power and pain in those songs.”

Musically, II finds the band in top form. Whether it’s the speed metal sound of the first single “Reign Of Error,” the wailing guitars on “Impostor Syndrome,” or the haunting chants of “Love Without Love,” the sound of destruction marches firmly onwards over the nine tracks. The message is still in the music, with Pearson pointing to “Christian Missile Crisis,” a song the bassist says “takes an obvious jab at organized religion, NRA-holes who clearly compensate for their lack of masculinity by fixating on gun ownership and gun ‘rights,’ and the fact that a large enough amount of Americans have the inability to negotiate peace and prefer oppressing others.”

Dead Cross once again teamed up with the dynamic artistic duo known as Eric Livingston (First Church of the Void) and Bran Black Moon for II. From the now easily recognizable, multi-limbed skeleton featured on the cover of Dead Cross to the frantic, yet powerful, video for “Seizure and Desist,” the politically-charged, pencil-drawn pieces go hand-in-hand with the music and have become a key part of the SoCal-based band’s aesthetic.

In the years that have passed since their debut album, the world has only gotten colder and harder, and Dead Cross remains steadfast in confronting it by any means necessary.single “Reign of Error” below now.