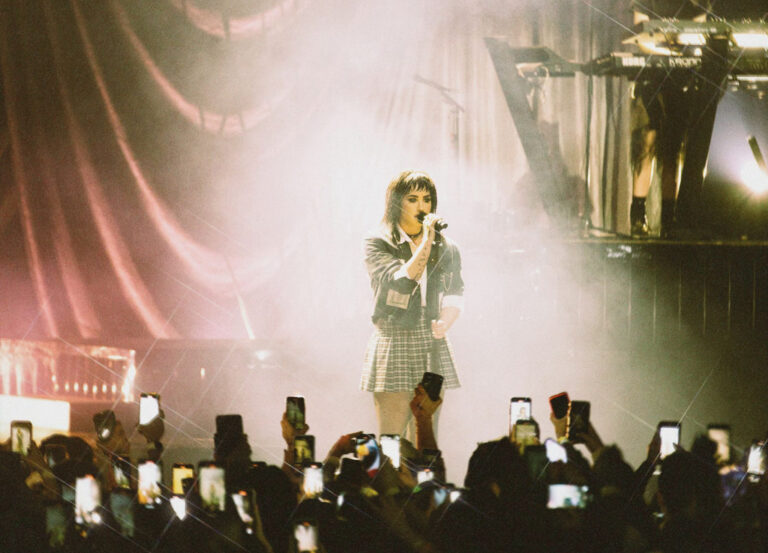 Welcome to the dark side, Demi Lovato.

The pop music megastar made their foray into rock with their latest LP HOLY FVCK. The disc dropped back in August and was a sharp contrast from their previous outings. It’s a 16-track slab of rock ‘n’ roll that is poetically anti-pop. The album peaked at No. 1 on the Billboard Top Rock and Top Alternative albums charts. It also landed at No. 7 on the Billboard 200. On the record, Lovato is angry and rowdy, saying whatever the fuck she feels like. All foundations upon which rock music has been built.

While the record is phenomenal, its sounds so much bigger and badder when brought to life on stage. This is thanks largely in part to the addition of super shredder Nita Strauss to the all-female touring band. Strauss departed Alice Cooper’s band back in July. In a social media post, she stated, “There is no drama whatsoever and my touring year is still very full – in fact, I’m on a flight straight into the next adventure as I post this, and I’ll be on stage again much sooner than you think!” On July 14, Strauss joined Lovato for a performance of their new single “Substance” on Jimmy Kimmel Live!

“I just released my eighth studio album,” Lovato told the capacity crowd at The Met in Philadelphia. “I’ve released a lot of albums, but I think the one I’m most proud of is HOLY FVCK.” That’s saying a lot for someone who’s previous seven LPs have charted in the Top 5 on the Billboard 200.

Arguably the show’s ultimate highlight came early in the evening. The set’s fourth song was “EAT ME” and saw Lovato joined on stage with Royal & the Serpent who make a guest appearance on the album version. At the end of the second chorus, both artists knelt down at the edge of the stage right in front of the crowd. Lovato’s dominant voice carried just a bit longer, blending into Strauss’s jackhammer guitar riff. For a hot second, the crowd’s deafening cheers actually drowned out the sound of the music.

A well-strung together mashup of “La La Land” and a cover of Ashlee Simpson’s 2004 hit “La La” made for a killer mix.

“Heart Attack” sounded super heavy live, with a breakdown worthy of any Warped Tour stage that saw Lovato, Strauss, and Bowes all headbanging in unison. “City of Angels” is a slice of pure pop punk perfection. Sadly, missing from the set was “Heaven,” one of the album’s meatier cuts.

Toward the end of the set, Lovato performed “Skyscraper,” a towering ballad about their mental health struggles and self-harm. In a similar vein, “29” – the third single from their latest album. The song is perhaps the most personal of Lovato’s career.

Lovato and company returned to the stage for a two-track encore of the new “HAPPY ENDING” and a metaled-up version of her 2015 multi-platinum single “Cool for the Summer.”

Last month, Lovato came down with an illness the day of her show in Santiago, Chile. “I can’t do this anymore,” she stated on social media. “This next tour will be my last. I love and thank you all.” We can only hope that they will change their mind in the coming months, because Lovato has barely scratch the surface of what they’re capable of. It would be wonderful to see the touring band that Lovato has put together actually get into the studio with them and see what happens. On stage, when Lovato is singing and puts her arm around Strauss who’s shredding away, the pair visually and audibly remind you a little bit of the legendary Ann and Nancy Wilson of Heart.

Obviously, the most important thing is that Demi is happy and healthy. Hopefully, they are able to get back to a place where they feel good about touring again. This tour sees Lovato carrying herself with a swagger we haven’t yet seen from them, and we need to see more of it – if they are able.

The HOLY FVCK Tour rolls on through November 6, wrapping up at The Pavilion at Toyota Music Factory in Irving, TX. Dead Sara will serve as special guests for the latter half of the trek. Tickets for all remaining shows are on sale now HERE.

The post Demi Lovato Was Born to Be a Rock Star appeared first on The Rock Revival.