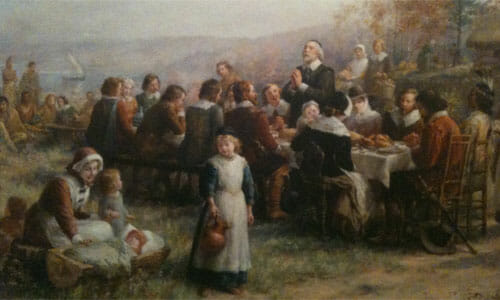 Thanksgiving is The Fourth Thursday in November

The United States of America was the first nation in the world to proclaim a national holiday for giving thanks, but it may not have happened the way you think it did.

It did start with the Pilgrims.  Some of the first settler in the “New World” we now call the Pilgrims began the tradition but it would be many years before it would be official.  The Pilgrims were names because the reason they left Europe and England which was to escape religious persecution.  They called themselves Puritans and the modern equivalent to them are the Fundamentalists.  The Puritans however were a much stricter group in following the precepts of the Bible than are the Fundamentalists.

The Pilgrims left England on a ship called the Mayflower and the cramped  journey was difficult.  When they finally landed in the new world the ship had gone off course and landed much further north than was expected.  Nothing went very well as the settlers began their new lives.  A very hard winter came on them and many died.  But spring came with it plantings and harvest.  The pilgrims decided to give a feast.  The exact date is not known but it was early Fall of 1621  This was no ordinary feast as it lasted three days.

Thanksgiving for these early settlers was not what we have today.  They had no flour, butter or sugar.  Potatoes at the time were considered poisonous and the corn grown was of the hard variety which was ground down and used as corn meal.  With no sugar cranberry sauce was not possible.

The first Thanksgiving Festival did, however, have turkey. Other culinary delights consisted of swans, geese, ducks, lobster, oysters, cod fish, bass, eels, pumpkin gooseberries and chestnuts.  The real sensation of the meal was brought by the honored guests of the pilgrims, the Indians.  During the rough beginning of the settlement of the pilgrims the Indians helped them survive.  In gratitude they were invited to the first Thanksgiving, however, like all good guests they did not come empty handed, they brought with them five dead deer and venison became the hit of the party.

There was a prayer that was offered by the minister William Brewster that has survived down the centuries.  “We thank God for our homes and our food and our safety in a new land.  We thank God for the opportunity to create a new world for freedom and justice.”

Thanksgiving went underground or disappeared for more than 150 years but raised its head again in 1777 when the thirteen colonies celebrated the day as the American beat the British at the battle of Saratoga.

George Washington, James Monroe and John Quincy Adams all tried, but failed, in making Thanksgiving an annual happening.  It would take another 100 years to make Thanksgiving a holiday.

Sarah Hale was a magazine editor in Philadelphia.  The industrial revolution had begun and Mrs. Hale did not like it. The cities began to get more populated as factories were constructed.  Jobs were available in the cities so many small town people moved away from their families to start new lives.  Family life was disrupted on many levels alcoholism became a problem and social workers started temperance leagues to curve the growing addiction.  As a city dweller herself Sarah Hale saw the problem and a solution.  Sarah Hale saw Thanksgiving.

Mrs. Hale pictured Thanksgiving as a time when families would draw back together.  Those who may have left home would come back and family values and love would be celebrated.  Then she got to work.

Sarah Hale started a letter writing campaign that may be the longest campaign ever attempted.  She wrote to congressmen, senators, governors, and presidents.  Alton Brown of Good Eats jokes that she may have written to dog catchers.  Sarah Hale wrote letters for 40 years until she finally got ear of President Lincoln.  On October 3, 1863 Abraham Lincoln declared the fourth Thursday of the month of November THANKSGIVING.

Unfortunately people just can’t leave a good thing alone.  In the 1930s President Franklin Delano Roosevelt makes an attempt to move the holiday to the third Thursday of November.  He wanted to extend the Christmas Shopping period.  Fortunately this did not go over well and Thanksgiving was moved back to its original place.  One wonders what Mr. Roosevelt would think if he saw retailers today beginning the Christmas gift buying season as early as July.

Finally in 1941, 15 years after Macy’s had introduced the Thanksgiving Day Parade, and 316 years since the first Thanksgiving was celebrated, Congress officially sanctioned the fourth Thursday in November as a National Holiday.  And so Thanksgiving was officially born.  The first meal may not have been what we enjoy today but the idea of giving thanks for making it through another year, to draw to family and friends, and to celebrate the love that we share remains the same.