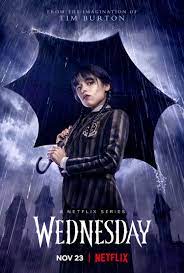 Goth’s every where unite Netflix has just announced that they are bringing their favorite little hell spawn back for a season 2. Since its release on Nov. 23, the debut season starring Jenna Ortega has become Netflix’s third-most-popular series of all time, behind only Stranger Things season four and Squid Game.

Fans of the show were nervous, because no season two was announced until just a few days ago. In the first season of Wednesday she is a student at Nevermore Academy, where she attempts to master her emerging psychic ability, thwart a monstrous killing spree that has terrorized the local town, and solve the murder mystery that embroiled her parents 25 years ago.

Tim Burton’s influence on the show is felt all around, he directed a majority of the series. There is no word yet on if Burton will be involved in season 2, but we can only hope that he will be. Stay tuned as more details emerge about the upcoming season.

Check out Jenna Ortega’s dance as Wednesday that set the world on fire:

The post Netflix Is Bringing ‘Wednesday’ Adams Back For Season Two appeared first on Age of The Nerd.