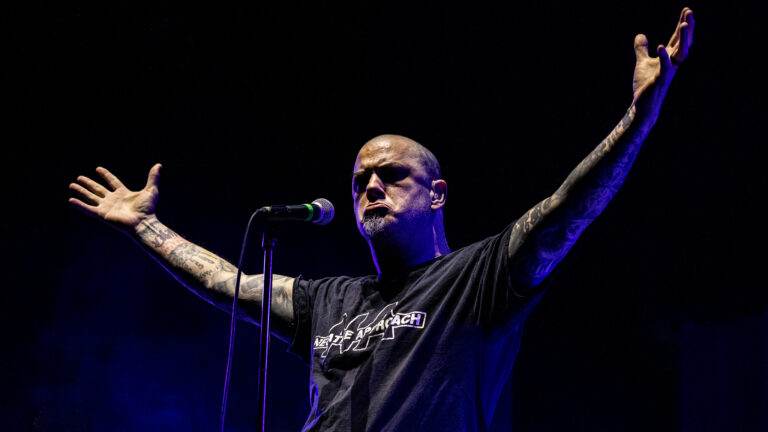 After playing select festival in 2022, Pantera have officially announced a full North America headlining tour. The trek kicks off on July 28 at The Pavilion at Star Lake in Burgettstown, Pennsylvania and wraps up on September 15 at Jiffy Lube Live in Virginia Beach, Virginia. Very special guests will be Lamb of God.

Tickets go on sale on Friday, January 27 at 10am local time HERE.

Citi is the official card of the Pantera tour. Citi cardmembers will have access to presale tickets beginning Tuesday, January 24th at 10 AM local time until Thursday, January 26 at 10 PM local time through the Citi Entertainment program. For complete presale details visit www.citientertainment.com.

Pantera’s first official reunion gigs were at Knotfest Colombia, Knotfest Chile, and Knotfest Brazil back in December. Surviving members Phil Anselmo (vocals) and Rex Brown (bass) teamed up with Black Label Society guitarist Zakk Wylde and Anthrax drummer Charlie Benante to perform under the Pantera moniker. Since then, the group has performed at a few other festivals around the globe. This upcoming run will be Pantera’s first headlining tour in over two decades.

Pantera’s last studio effort was their 2000 watershed album Reinventing The Steel. The album landed at No. 4 on the Billboard 200. Many fans and critics maintain that the album is the band’s best overall piece of work. In October 2020, the album was re-mixed by producer Terry Date and re-released on CD, vinyl, and digital download to celebrate its 20th anniversary.

In 2001, Pantera’s classic lineup went on an indefinite hiatus and never reunited.

To date, the four-time GRAMMY® Award nominees have sold over 20 million records worldwide.