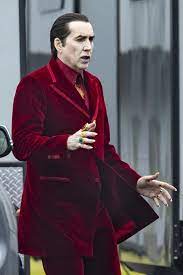 Nicolas Cage has made a name for himself the last few decades playing odd ball characters. He even played a version of himself in last years The Unbearable Weight of Massive Talent alongside Pedro Pascal. And this year is no different, well just a little Nicolas Cage is playing the undead.

That’s right our favorite cult anti-hero actor is playing a vampire, Count Dracula in fact. Universal Pictures  is bringing Count Dracula back to life. The Academy Award-winning actor is not the main character.  The film’s protagonist and namesake ‘Renfield’ will be played by Nicholas Hoult who is the dead vamps right hand man.

Renfield begins as a devoted servant who gradually becomes disillusioned with carrying out Dracula’s evil demands. Love is in the air when Renfield falls for a traffic cop played by Awkwafina.

The script was based on an idea from “The Walking Dead” comic book co-creator Robert Kirkman and authored by “Rick and Morty” writer Ryan Ridley. The film will be directed by Chris McKay.

Check out the trailer below. Renfield will be hitting theaters April 14th:

The post The Fangs Are Out In ‘Renfield’ Nicolas Cage’s Next Movie appeared first on Age of The Nerd.