In movies and in real life, whenever people talk about large amounts of money, they talk about the Benjamins. This is because of Benjamin Franklin, who is on the $100 bill.

When Benjamin Franklin was born in Boston on January 17, 1706, no one knew then that he would be famous. People think of Franklin as a genius, but he had only two years of formal schooling. He was apprenticed at … 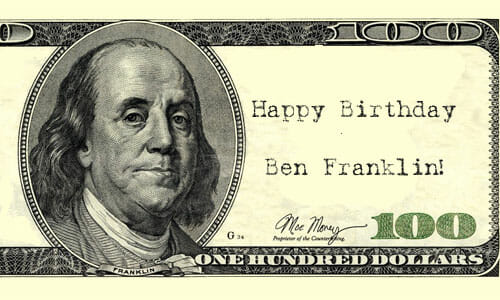 1773 – Captain James Cook and his crew became the first Europeans to sail below the Antarctic Circle.

1929 – Popeye made his 1st appearance, in comic strip ‘Thimble Theater’

1929 – From the Mount Wilson Observatory, Carnegie Institution of Washington, Edwin Hubble showed that the universe was expanding.