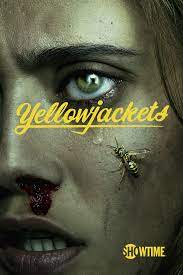 Tomorrow night will see the season  finale of the show Yellowjackets. The show premiered on Showtime in mid November and became a hit. With everything from fans deciphering the opening credits, and fans on Reddit and their conspiracy theories. All this melds together well with a great cast and story. Yellowjackets follows the tale of a successful girls high school soccer team and there descent into madness including cannibalism after a plane crash in the Ontario wilderness. The series also chronicles there modern life, and how their dealing with trauma twenty five years later. The series stars Jasmin Savoy Brown, Sophie Nélisse, Sammi Hanratty, Sophie Thatcher as the teenagers. And Melanie Lynskey, Tawny Cypress, Juliette Lewis, and Christina Ricci star as the adult versions of the teenagers. Showtime has already announced that a season two is on the way. For anyone that is a fan of 90s music, girl power, and a little cannibalism this show is for you. Check out the trailer below and be sure to check out the show:

The post Be Sure To Check Out The Series Finale Of Yellowjackets This Sunday appeared first on Age of The Nerd.

Talk about a town that will give you chills! Welcome to Castle Rock! This is truly the place where nightmares really do come true. The Hulu Original Series “Castle Rock” is a pure psychological thrill ride set within the Stephen King multiverse and we have had the best time delving head first into this series. more »

The post Our Thoughts On Hulu’s ‘Castle Rock’ And What We Learned At SDCC appeared first on Age of The Nerd. We had the pleasure of interviewing creates and actors of the new Stephen King series ‘Castle Rock’, which airs next year on Hulu.